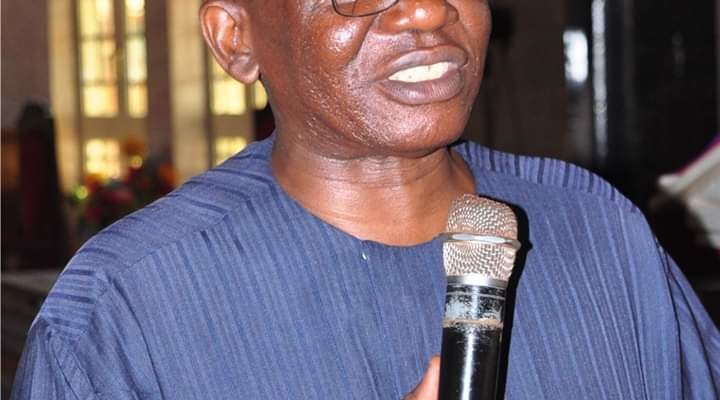 Cell experience led me to jesus 30 years ago

By this time in 1989, November 19, (30 years ago) something dramatic happened in my life. I received the gift of eternal life. I became born again. I was born into God’s Kingdom. The 30 years seemed to me like 30 days! Praise God. This same 2019 marked our 25 years as missionaries in the Lord’s Vineyard. It’s a double barrel blessing to say the least!

I want to share this because my experience then was not just an ordinary one. It was dramatic as I said earlier looking at the circumstances of the events that transpired in my life. I usually liken new birth experiences in two ways: That of Apostle Paul which occurred in more dramatic sense – in a harder way, and Apostle Matthew (Levi) which happened in a more relaxed manner – in the comfort of his tax office.

My experience was like that of Apostle Paul. It all happened during my detention in one of the then most notorious Police cells in Nigeria, the Panti Police Cell in Yaba, Lagos. One my town’s man who used to be my business partner got my company implicated in money laundering syndicate (419). Being the President of the company, I was picked up that faithful evening along with so many others involved in the illegal deal and was locked up in Apapa Police Station and after one week we were moved to Wharf Police Station were we stayed for another one week.

It was from there we were moved again to Panti Police Station, cell three, to be precise. Cell one used to be for very serious and notorious armed robbers. So, we were allowed to negotiate for cell three (though with some money involved) before we set out in order to lessen our agony. We stayed another three weeks in Panti. It was in the third week that a cell mate known as Victor who was also the “pastor” in-charge of the fellowship in the cell tapped me that faithful morning and requested I join the fellowship (it used to be a powerful one) which I reluctantly joined (Victor who was facing murder charge was latter hanged).

Reluctant, in the sense that anything that had to do with church never interested me then; I was deeply involved in masquerade and occultic practices. My late father was averse to anything church and as such I and my other siblings were not brought up in the ways of the Lord. Space may not allow me to mention how deep I went in occultic practices.

It was in that fellowship that faithful morning that an altar call was made, and I immediately responded. That was the beginning of my journey in the Kingdom. In fact, it was the next day after my response to the altar call that I heard my name called. It was an invitation by the Assistant Commissioner of Police (ACP) to his office and after the interview, he there and then granted me bail with less conditions, while my friend who caused my going to cell was denied bail. He was later released after some weeks. His statement absolved me of any involvement in the money laundering case.

Cell experience and my encounter

Meanwhile, a week before then we had received a very sad news that our case file was about to be transferred to Alagbo Police Station in Ikoyi. This was actually going to be a day after I responded to the call. It was a great miracle for me to be released. I later understood it was the mighty hand of our Lord God that perfected it. In fact, my Investigation Police Officer (IPO) never believed it was true, but it was! My bail bond was facilitated without much hassle and I was left off the hook.

For anyone who knows Panti Police Station, can testify that it is not a place anyone would wish to stay even for one day. While we were there, two dreaded and notorious armed robbers beside me died. They were shot by the Police and all night they writhe in pains until they passed away without anyone caring for them.

To me it was an awful experience. While in the cell over 20 people were brought in. They were arrested for wandering. A cell that had a capacity of 20 or less people now had over 40 inmates. All through the night for about four days we never slept as a result of overcrowding. It was such a horrible place. It was better imagined than experienced! In fact, space will not allow me to give details of my three-week ugly and sour experience there.

It was after my release that I went straight to buy a Bible for myself, in fact, my very first Bible! It was while reading my Bible one of the days in the office then that a Christian sister saw me and was surprised I was reading the Bible. She inquired of the church I was attending. I said none. She then invited me to her church, The Household of God Fellowship at Obasa Street, Ikeja. I followed her and all is now history.

Incidentally, I never met that sister again my entire sojourn in the church. It still remains a mystery to me until today. Meanwhile,  I grew up in Household under Pastor Chris Okotie for almost six years, got married there and from there went to Bible school/school of missions. Later, I joined the outreach department of the church and was involved in hospital ministry.

What’s more, we launched our rural mission project in Ejila Awori from that same church. It was after then that I and my wife, Ngozi made TREM Iyana Ipaja, Lagos our home church.  We later left Nigeria for our foreign mission work in faraway Philippines in Southeast Asia, where the Lord used us for over eight years. We were reaching out to the Badjao tribal people there. To the glory of God, we have since 2014 retreated home and are continuing with our pioneer work in our new home mission field in Ntezi, Ishielu Local Government Area, Ebonyi State. We’re now involved in so many pioneering efforts there.

Whenever I recall my life prior to my salvation experience, I could do nothing but show my gratitude to God for His salvation and deliverance upon my life. It was His mighty hands that drew me out of the pit of hell, all to His glory!

One Scripture that the Lord gave to us that has been pivotal to all our missions’ escapades is Matthew 28: 18-20: “…and lo I am with you always, even to the end of age.” No doubt the Lord has been our shield and strong tower and we give all glory to Him.