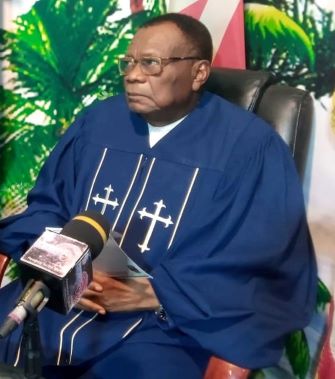 The founder of Christ Apostolic Church, Agbala Itura, Prophet Samuel Abiara has expressed the wish that God would grant him the privilege to build about 200 units of one-bedroom self contain apartments for the less privileged before he sheds his mortal body.

He made the disclosure on Monday, November 29 while announcing the 2021 edition of the Church’s Jesus festival.  The Jesus Festival is a week-long programme starting December 6 at the Ibadan headquarters of the church.

Prophet Abiara, 79  said God laid in his heart to build the massive estate of 200 units of self-contain apartments along with other empowerment programmes for the poor.

Already, the Abiara Divine Foundation established about ten years ago has been involved in some humanitarian work.

The foundation has offices in Lagos and Ibadan. It is working on opening more offices in Abuja, the USA, and the UK. The goal is to create a meeting point where people who have needs can come and they will be attended to.

Abiara stated at the conference that there is a growing number of needy people in society. He urged wealthy individuals to release their funds to help the poor and make society better.

“I want to appeal to those who are keeping money in obscure places to be sympathetic to the plight of the poor. Some Nigerians have idle funds. Such funds can be invested in people who have small businesses.

“My appeal is to the wealthy. They should not allow money to rule them. God gave them the funds to help the needy and empower those who need empowerment. We should not be suffering in Nigeria if all the wealthy people use their funds to create jobs and empower people,” he said.

We want to drive poverty away

The former CAC General Evangelist said his foundation will continue to campaign against poverty. “Our vision is to be able to drive away poverty in the land by supporting those who are genuinely in need. We are already doing the bit we can.  Our foundation helps in the education of the less privileged.

“The foundation empowers people by buying working tools for them. But we can do more if we get support. I am also urging Nigerians who God has blessed financially to make it a duty to set a certain percentage of their income to help the needy.”

While disclosing that God had used him to provide housing accommodation for some people, he said, “There is a growing number of people who have challenges with where to live. My vision is that we will be able to have mini-apartments that could be made available to these people so that they can really concentrate and do what God has programmed them to do. When people don’t have where to live, they can’t think properly,” he said.

Abiara said his vision is to build 200 units of mini houses to start with.  “It could be more, but we need to start somewhere.”

He urged other church leaders to carry the burden of helping the poor. “It is unfair for people to go hungry in the midst of plenty. Many are really hungry and we can’t afford to pretend about this. We need to rise to come to the help of people as God empowers us.

“There are people who have houses nobody is living. They have cars that have been parked for years, they waste foods that would have saved lives. These people should think of those around them and help them. If they don’t know what to do with their wealth, they should reach out to organisations that support the poor.” Abiara stated.