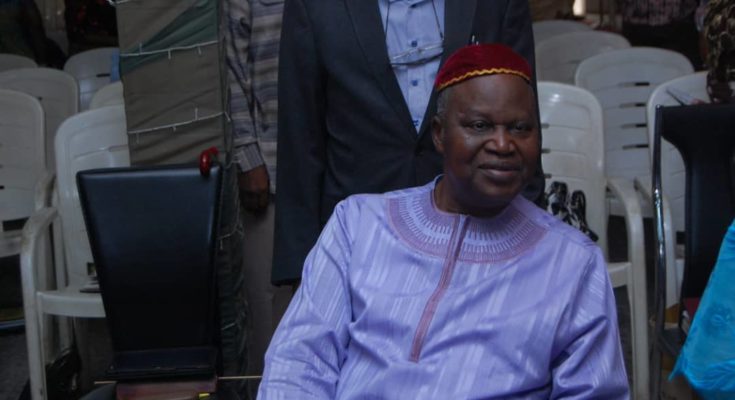 By Collins Nwokocha
Founder of The Evangelical Church of Yahweh, Primate Theophilus Olabayo has said there may not be elections in Nigeria in 2019 going by the signals he is receiving from heaven.
He made this known in an interview with our correspondent at his church office in Mende, Maryland Lagos recently.
Olabayo who has been vocal on the prophetic terrain for decades in Nigeria also said President Mohammadu Buhari cannot take Nigeria to its desired destination.
He said, God told me that Buhari is not the messiah and he has a short time to spend on the seat of power. By what I have seen as a prophet, election might not hold next year, God is going to interfere in the affairs of Nigeria, there has been so much trouble and chaos in the country, we are praying for God’s intervention because only God can settle the affairs of this country.”
Olabayo who has been lying low lately perhaps due to old age took a deep breathe when our correspondent asked him to clarify his stance on the 2019 election. He said, “Hmm, will this election really hold? Let us wait and see, there might not be election next year, people are busy getting ready for the election. Politicians are equally warming up for the forth coming election. But everything rests in the hands of God. The election that people are looking forward to, might not happen. There will be so much chaos and trouble in the country and God will take over the affairs of the nation by Himself.”
He took a swipe at the church saying, “corruption has taken over Christianity in Nigeria. The men of God in Nigeria have refused to speak the truth. We have so much insincerity and dishonesty in Christendom today. People are not saying the truth rather they are busy romancing the government. We see men of God going to Aso-Rock, when they get there, they don’t say the truth. They play with the government and say soothing things so that the government can give them money; they don’t know that they are doing this to the detriment of the entire Christians in Nigeria.
“That is why the government has suddenly lost respect and regard for Christianity in the country. Our men of God have sold their birth-rite for a plate of pounded yam. At the point in time, the former President, Olusegun Obasanjo said that Nigerian churches are corrupt. How could he have had the effrontery to say that if some men of God have not ridiculed themselves in his presence. Do you think that he doesn’t know what he was saying? Of course he does. He was on the seat of power and he knew how many pastors and men of God he gave money.”
While emphasizing that God called him to liberate the human race from the shackles of demonic bondage, he said, “God called me to liberate the world, He called me to be His mouth piece just like Jeremiah and Isaiah. He called me to work against forces of darkness and give hope to the hopeless. I am a mouth piece of God. I have predicted all that is happening in Nigeria today 20 years ago. God showed me these perilous days will come in Nigeria, the killings and the unfair treatment of Christian in the country have been revealed to me long time ago.”
He then counseled Christians to be honest and truthful. We should try to eliminate corruption from the Church. If we truly want the government to respect us as Christians in the country, we must uphold our integrity. We must not allow money to rule us. If we make money our master we will fail. We have to abide by the truth and be prayerful because we are in the perilous days. We must learn to speak boldly and stand firm on our solid ground, as Christians. We should be very courageous and fearless. If we can abide by all these, I am sure that we will regain our lost dignity in this country and we must also pray that God will really take over the affairs of things in this country.”